“This story starts on May 11th, in Brussels. After one month of impatience, I was rewarded with the first prize in the category “MAX ASO”: a 10 day linguistic stay in Paris. Overjoyed, albeit not surprised, I sensed another imminent bout of impatience and anticipation…
However, a few weeks later, I was informed that the destination would not be the city of lights, but Arcachon, a port city in Southwest France, about 70 kilometers from Bordeaux. Situated in a bay on the Atlantic Ocean, people here take advantage of the beautiful weather, the mild microclimate and the expansive beaches. It didn’t take much convincing to get me to pack my bags and head out!”

“I arrived in Bordeaux by train, my host family came to pick me up, and they took me to their home in La Teste de Buch, a city in the heart of Arcachon. Thanks to the warmth and hospitality of the family, I was able to quickly adapt to the local lifestyle. With two very kind host parents, Marie-Claude and Pierre, a terrific Spanish friend named Miguel, and a wonderful home that surpassed all expectations, the foundation was laid for an unforgettable trip!” 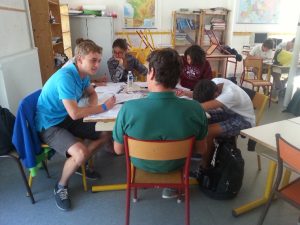 “During the school activities, we were divided into two or three groups according to our level. No matter what group you were in, we were all outnumbered by the quantity of Spanish students. They represented more than half of the 55 students in total! Outside of this armada, there were students from Russia, Italy, Germany, the USA and, fortunately, two other Belgium boys. Despite the Spanish majority, the groups were always balanced and diverse which allowed everyone to contribute and enrich their personality. Even though I attended classes to learn French, it was really the personal experiences outside of the classroom that taught me the most.”

“Every morning the professors expected us at school whereas in the afternoons, the instructors accompanied us during our activities. Few people wanted to go for walks or plays sports when it was hot out. Consequently, our afternoon excursions were either in the shade (visit to Bordeaux, visit to the lighthouse of Cap Ferret, a canoe trip and tree-climbing in Biscarrosse) or at the beach (climbing the Dune de Pyla, stand up paddle-boarding, and of course the relaxation of tanning and swimming in the ocean). Climbing the Dune of Pyla, the largest dune of Europe, was perhaps the most arduous task we experienced. The extremely hot fine sand and the burning sun made this outing a downright challenge.
Unfortunately, it was eventually time to return home. Leaving was very hard and saying goodbye to everyone was painful. It’s a shame that everyone left one by one and not together as a group. Even though there are lines of communication at our disposal to maintain these international ties, it’s the extraordinary memories and newfound cultural knowledge, rather, which we hold on to.”